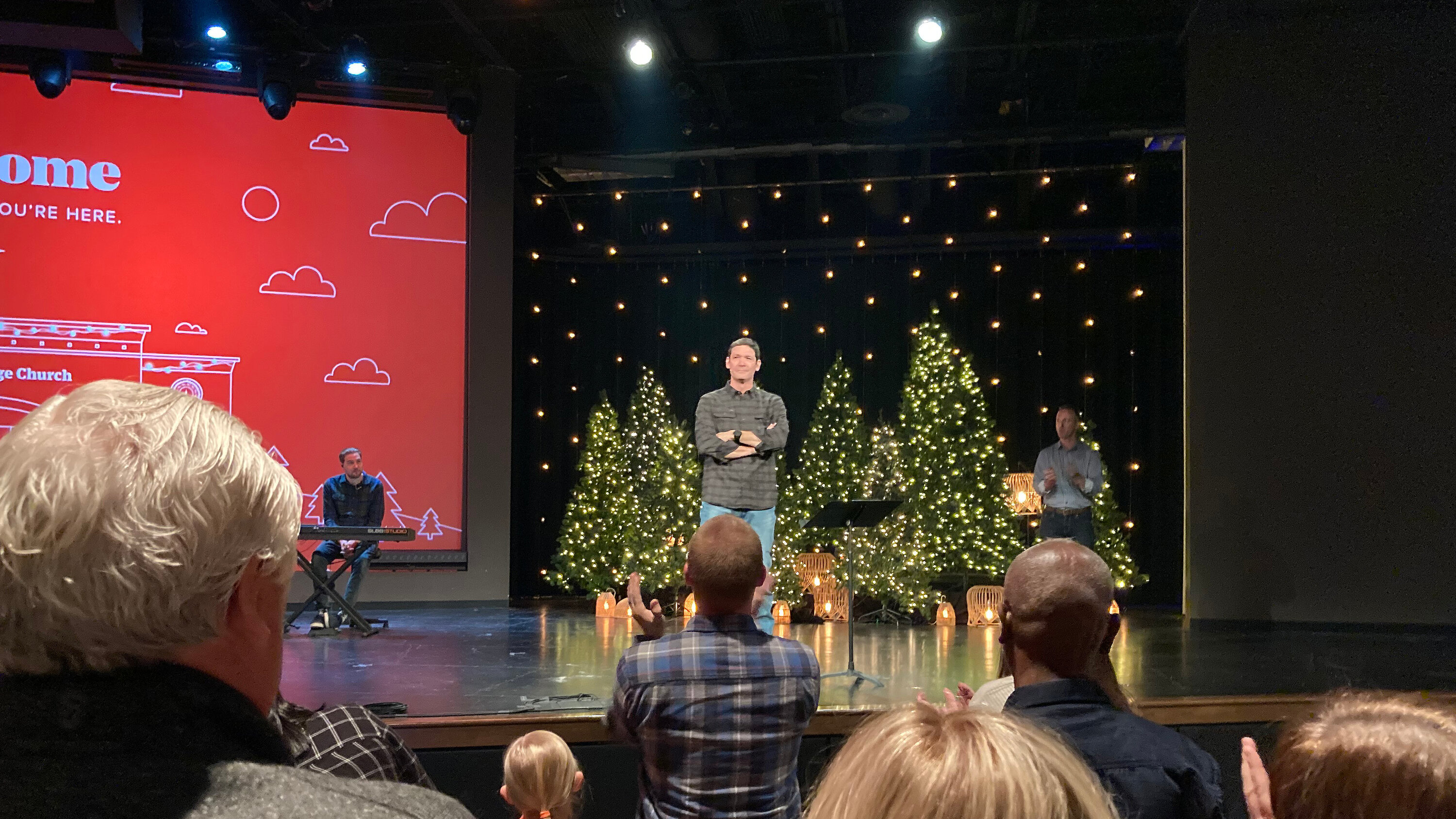 Matt Chandler returned to the pulpit Sunday at The Village Church, restored to ministry by Texas church elders just over three months after he took a leave of absence due to what one elder called “some challenges that came up.”

“I realized that I had not reached the glory of God and He accepted me with grace,” he said. “I understand that I’m incoherent and that there are things about me that are hypocritical, and there are parts of me that I don’t understand.”

Citing Ephesians 2:13-17, Chandler urged the congregation that the true promise of Christmas is reconciliation with God. But that can only begin, he said, if people own up to their sins, as he himself did on that stage in late August.

“Humble yourselves before a living God who gives us a chance at peace,” he preached. “I have a part of it that I must own. It may only be 1 percent, but it’s my 1 percent. Excuse me. Now we have a chance to compromise.”

While pleading guilty again Sunday, Chandler did not give any further details about the circumstances that led to his absence. In late August, he admitted to an inappropriate online relationship with a woman via direct messaging on Instagram. Chandler said at the time that the ongoing exchange was not sexual or confidential, his wife knew it, but church elders were still concerned about the “frequency and familiarity” and especially “a familiarity that spreads.” evolved into rude and silly jokes”.

A church statement in August said the direct messages violated its social media policy and “crossed the line.” The elders determined that Chandler was not disqualified from the ministry, the statement said, but that “he had lacked health in his life.”

No information is available on the woman Chandler was talking to and whether the online relationship hurt her in any way. His views on discipline and the recovery process are also unknown. He is not mentioned, even indirectly, in Sunday services.

Senior pastor Josh Patterson told the congregation that Chandler was disciplined because the church holds its leaders to a “higher standard.”

He said that after three months off and a process of discipline and development, the elders are confirming Chandler’s recovery without a second thought. Chandler’s comeback, he said, is reminiscent of an athlete returning from knee surgery.

“That athlete might come back on the field a little shy, ‘Is the knee okay?'” he told Church. Then he turned to Chandler: “Brother, the knee is fine. Run.”

The restoration comes at a time when Southern Baptists grapple with questions about the quality of ministers returning to the pulpit after a scandal or moral failure. Former Southern Baptist Convention president Johnny Hunt was reinstated to the ministry last week, six months after a third-party investigation into allegations he was credibly accused of sexual abuse.

Ministers on Hunt’s spiritual ministry team compared him to the beaten and wounded man on the side of the road in the parable of the Good Samaritan, expressing no concern for the pastor’s wife, who said Hunt attacked her. The four men said Hunt could return to ministry because he had expressed “genuine brokenness and humility before God.” Bert Barber, the current president of the convention, said he would remove Hunt if he had the power.

At The Village Church, Patterson’s acceptance of Chandler’s elders’ discipline and following his recovery plan indicates that Chandler is ready to return to leadership.

The church declined two requests from Christianity Today to answer questions about that restoration process. Some details were given at the Sunday service. Chandler mentions seeing a neurologist (he was diagnosed with brain cancer in 2009) and some “intense” things, without sharing any other details.

According to the post on Instagram, Chandler spent time at a men’s summit led by pastor Jim Bergen, who wrote a book on deliverance from bad decisions.

In October, Chandler attended an Acts 29 gala and spoke on opening night. Later that month, he wrote about spending time in a cabin by the river, going for walks, practicing jiu-jitsu, and praying the words of Psalm 27, “May I dwell in the house of the Lord all the days of my life.”

In November, Chandler went elk hunting in Colorado on a trip organized by Bergen. He posted a picture of himself camouflaged in the snow with a rifle bullet on his shoulder.

“We spent hours talking about Jesus, marriage, children and the dark things that can affect men,” Chandler wrote. More than 10,000 people liked the Instagram post and several commenters said they were looking forward to seeing him back in the ministry.

On Sunday, Chandler thanked the veterans for loving him and his family and working with him in planning his vacation and eventual return.

“What a brave and pious group of men,” he said. “Brave, I almost used another word, and then I had to sit down again.”

The church laughed at the joke. At other times, the congregation urged Chandler to continue shouting encouragement. “Come on, Matt” or “You got it, Matt,” several said, the pastor overwhelmed with emotion.

Ten elders gathered around him on the stage before Chandler’s sermon. They laid hands on Patterson as he prayed. He said they were “marking a moment in Matt’s heart, to say, ‘Restored’.”

At the end of the service, the congregation thanked Chandler for his 20 years of service. He was joined on stage by his wife and three children, and the congregation rose to its feet and gave the pastor a standing ovation.